Pergamum is one of the few ancient sites in the world that has preserved its original Hellenistic ruins and character to a very large extent. The objective of this book is to acquaint visitors with these ruins and help them to understand the history of Pergamum better.

This guide book takes the reader through the Upper, Middle, Lower Acropolis, Temple of Serapis (Red Hall) and Asclepium of Pergamum describing its surviving monuments in detail. The chapters on Aelius Aristides, Galenos, cult of Asclepius, history of Pergamum, foundation story, the Attalids, Roman city, Christianity in Pergamum help the visitor to appreciate the city better.

In this volume the surviving ruins from the Hellenistic and Roman history of Pergamum are introduced one by one in the order of the sightseeing itinerary of the present day. These ruins begin with the heroon (a shrine dedicated to a deified or semideified dead person) situated in front of the gate of the upper acropolis (citadel) and terminate with the lower agora of the lower acropolis. Effort has been made to make these ruins more meaningful by including the art objects discovered during excavations and moved to museums in Bergama, İstanbul, Berlin or Paris, by including their pictures in the related chapters. 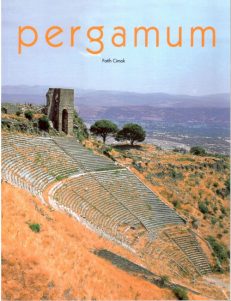